Music Inspires Life. This Music Clipart will Inspire Your Projects 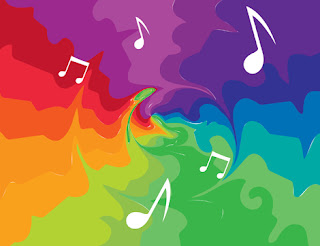 Sometimes social media really can be entertaining.  I don't generally play the games. Only occasionally, perhaps when bored, will I play the quizzes.  I never get caught up in the requests for reposting.  And I'm not too enthusiastic about accepting the 'challenges' that come my way.

Yet, every once in a while, there is one of the latter that titillates, that appeals to my interests or my curiosity. Recently I noticed that my son had posted a 10-day challenge calling on his nominees to post a photo of "one of their all-time favourite albums, in no particular order, but something that made an impact and is still on the rotation list".

Over two days he nominated siblings and I found myself waiting, hopeful, wanting to be part of this. Because for as long as I can remember music has mattered to me.  It has made me feel alive, comforted me, soothed me and inspired me. I certainly knew then,  that coming up with 10 albums that affected me in some profound way wouldn't be the challenge. Stopping would be. And deciding which would make the list.

When, on day three, I finally saw I'd made the cut, there was a good deal of thought, introspection and a few trips down good old memory lane before making my choices.  Thinking of the word 'impact' was what inspired the selections I made — albums that had left an imprint on me, in some cases decades after first hearing them. They spoke to feelings, times and places and there wasn't a dud song on any of them. The artists were people I have often quietly thanked over the years for what their gift gave to me.

I had fun with this challenge, unquestionably. But what further impressed me was how readily others joined in. Not only did most of those I nominated participate they did so enthusiastically. All were eager to post, some almost immediately after being tagged, and were equally as excited to discuss the effect that someone else's choice had had on them. It absolutely reinforced what I've always known  — music is extremely important to lot of people.

When I think of the direction music's taken lately, or of the politicians who give it — and all of the arts for that matter —  such short shrift, I am saddened and angered. Too bad there weren't more politicians like Edward Bulwer-Lytton. This member of the British Parliament in the 1830s was also a novelist and playwright. You've heard the phrases, "the great unwashed", the "pursuit of the almighty dollar", "the pen is mightier than the sword" and the famous opener, "it was a dark and stormy night"? All were laid to paper by Lytton's glorious pen.

The first Baron Lytton, in his lyrical prose, also recognized the effect of music on people. "Music, once admitted to the soul, becomes a sort of spirit, and never dies."

Today, we pay tribute to that with these impressive collections of music clipart: